As much use as spectacles on a chicken

Myfanwy the hen, daughter of Charles the cockerel, has become a chronic egg eater. I tried breaking her of this unforgiveable vice by shutting her in the aviary (which we've nicknamed Egg-xsile) for a fortnight. Time served, I let her out, and she proceeded to eat the 6 Silkie eggs I put under a broody hen. As a malefactor and repeat offender she was facing two options: a trip to the log pile or specs. 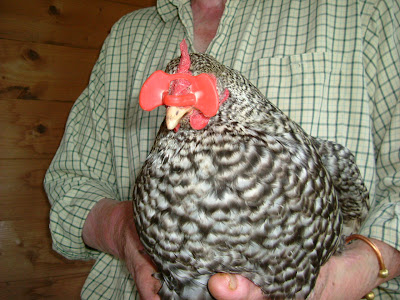 They are little plastic blinders that clip into the nostrils (they don't pierce the septum). The specs block the bird's forward vision which prevents egg eating, feather pecking and cannibalism (ewww...) They're commonly used for pheasants although we don't use them here, preferring smaller stocking rates and access to outdoor pens to alleviate boredom - the main cause for such vices. 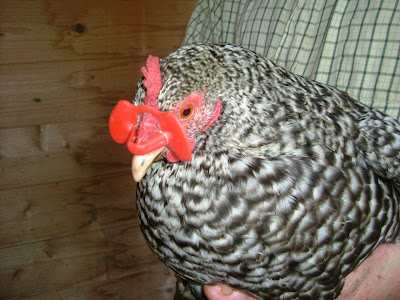 She has peripheral vision, so she's able to free range about. Spec'd birds forage less but can feed from feeders without a problem. And she can dustbathe, wander, visit with her friends. No more Eggs-xile, no logpiles.

If she mends her ways, or after peak egg laying season (whichever comes first), I'll remove her specs and we will see if she's a rehabilited bird. It's Raising Arizona, but with chickens:

Me: They've got a name for people like you Myfanwy That name is called "recidivism."

Me: Not a pretty name, is it Myfanwy?

Myfanwy: No, sir. That's one bonehead name, but that ain't me any more.

Me: You're not just telling us what we want to hear?

Mike: 'Cause we just want to hear the truth.

Myfanwy: Well, then I guess I am telling you what you want to hear.

Me: Boy, didn't we just tell you not to do that?

What a riot, Myfanwy is quite the trouble maker it seems. Glad that the specs will help eradicate her behavior before she herself is eradicated. You are very patient as I think she would have seen the wood pile already were I in your place.

LOL! It would be "good cop, bad cop" if only one of you had been good. She gets bored cos she's too smart...in order to rehabilitate the chicken, you must first BE the chicken... good luck with the specs, Myfanwy!

You made me laugh :o) 1)That is such a clever idea to stop egg-eating. 2)I love that you have a hen called Myfanwy... (is this a little Britain reference?)

Colette - it boggles the mind, doesn't it? Someone had to invent and design those.

Terry - I have a soft spot for Charles's offspring, even when they're obnoxious.

Sara - BE the chicken...hahahah...like a "chicken whisperer"

Maria - Good spot on the Little Britain reference! We were spending a lot of time in Wales too, and figured our flock should be more diverse, hence a nice Welsh name.

Goodness, who ever head of such a thing! I suppose the easiest way to stop an egg-eater is to eat her (say that 4x fast) but I like your method, it's giving the girl an out.

And that is easily one of my favorite movies. I usually get my husband to do something by saying "You gotta do that, Hi."

El - Fantastic - does it work on your husband? I might just try it. Yes, Myfanwy is a girl gone wrong, and just she needed guidance in the right direction.

I guess that she must be worth all the fuss. Naughty girl- I hope she reforms.

Now I want to see Raising Arizona all over again.

Well..... this has just been the most entertaining poultry conversation I have ever been a part of! LOL I'm from the southern U.S. and "specs" are used there on the chicks. Most of my southern ancestors came from England.

Paula - I hope this hasn't ruined the movie for you, you'll be watching it and thinking of our wayward chicken.

Karen - Maybe your ancestors are the ones responsible for bringing chicken specs to the Southern US?? I'm teaching people here how to make biscuits with sausage gravy - is that a fair exchange?

You may be on to something there Jennifer! Sounds like a fair trade! Do you make tomato gravy too?....It's made with tomato juice instead of milk or water. Very tasty with bacon! It's a southern dish for sure, sort of like grits. Gotta be from the south to like them! ha ha

That is straight out of a Woody Allen movie. (One of the early, funny ones.)

We've been talking about getting some barred rocks in our next flock, and now we have another reason -- they look great with glasses.

Tamar - She's got a sort of Lady GaGa thing going on with the glasses. Now, if I could only teach her to walk in those Alexander McQueen heels... 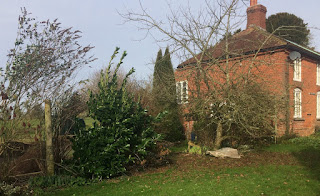