Amelia and Laura - the fabulous women behind Harvest Kitchen Sisters blog - included me as part of their Guest Blogger Series. Can I suggest you check them out, their interesting guest bloggers, and of course you can read a bonus post from me about my year spent in France. As you can imagine, it wasn't exactly a tour de force.
Posted by Jennifer Montero at 10:14 No comments:

We've been feeding the freezer over the holiday season. There are only 3 more weeks left to harvest pheasant and partridge, and this winter has been so mild that even the January birds are in good condition, still with a yellow layer of fat to buffer them from a cold snap.

The warm weather hasn't been a blessing all around. The dogs were hit hard with a stomach bug, possibly from bacteria in muddy puddles or cow pats (both are dog delicacies). A harsh winter would normally keep the bacteria in check. The illness only lasts 24 hours per dog, but as one recovered another came down with it. I think it's passed through, so I guess I can rub off the red crosses from above their kennel doors.

I've had bacteria on the brain - figuratively speaking - after a chat with Peggy, who teaches me butchery. Her pigs had a porcine version of IBS (Irritable Bowel Syndrome) and we talked about treating them to restore their gut balance, rather than bombing them with antibiotics. After all, the pigs were healthy otherwise, and drugs are expensive and not without side-effects. It gave me an idea for treating Matilda.

Our orphan lamb, who has survived just about everything in her short life, was not thriving. Most noticeably, she had the 'pot belly' common to bottle-raised lambs. But her belly was bigger than most, and tight as a drum. 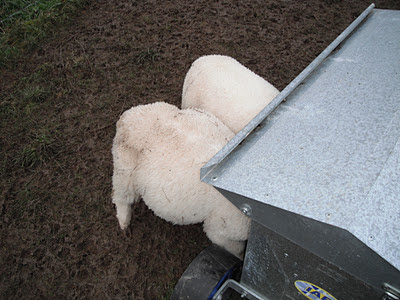 Compare and contrast: that's Matilda in the foreground (obviously)
As she's been weaned for awhile, bloat was unlikely. I took her to the vets to talk about an experimental treatment: get her guts moving again, then add a pro-biotic to help re-balance the flora. I went away with metaclopramide injections to kick-start her gut motility, plus a B-vitamin injection (necessary vitamins which won't have been synthesised without a good, working rumen), and followed it with a week's worth of Pro-Rumen, good bacteria in powdered form that I added to water and got her to drink from a syringe.

(FYI - Pro-Rumen is both sticky and smelly. If you get it on your iPod touch screen, it actually coats it enough to stop it responding.)

The treatment is working well, so I related the boring technical details above, in case anyone else can benefit from our experiment. Her belly size has decreased and she's much livelier now. But the thanks has to go to Peggy and her pig expertise for the initial idea.

A commercial shepherd would probably question my approach in treating individual lambs. It's not always cost-efficient and it does affect our profitability. But, I have a deep-seated reason for wanting to save them all, which I'm going to whisper to you now (don't tell anyone..): When Mike and I got caught in the gas explosion, I was wearing a 100% wool sweater. Wool (or more correctly the lanolin) is naturally flame-retardant and protected my whole torso from being badly burned. I sort of feel I owe one to the sheep. In fact, there is a line across the middle of my right hand where the extra-long sleeve stopped, and a v-shape of scarring at my throat, an outline of the sweater's edge, marking how much worse it could have been.

Anyway, sheep traumas over for now, it was back to wild foods for the freezer. Mike, Underkeeper Pete and I have been walking the margins of the estate, to harvest some of the outliers - those birds that never go over the gun line. They find a quiet copse like this one and try to sit out the shooting season - 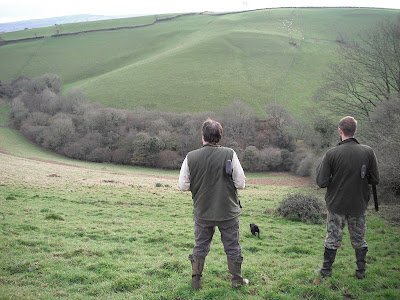 Mike and Underkeeper Pete survey the landscape
The birds in there are more clever than we thought. We walked through the whole copse and fired at least a box of cartridges. Neither Mike nor I seemed to be able to bring down a single bird. If it wasn't for Spud, our irrepressible Flat-coat, catching a hen pheasant herself, we would have gone home empty-handed. Underkeeper Pete shot one, and his terrier-mix Wigeon caught the other. 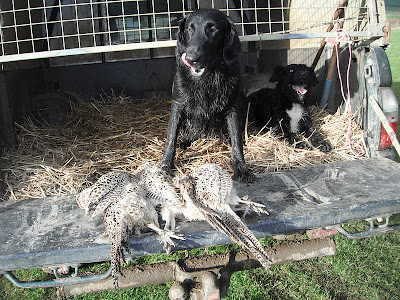 We had better luck on the duck ponds later that evening. Pete bagged a mallard and I had this little hen teal - 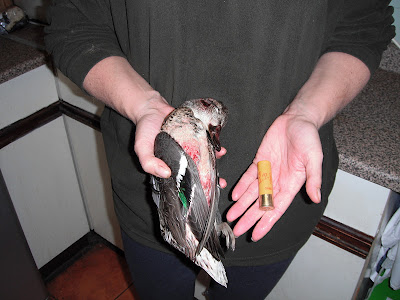 I shot it, but I would never have found it without Spud. She winded it almost immediately in the thick grass, nowhere near where I thought it had fallen. That's one more for the dogs then.

Mike prefers fishing to shooting and left us for another pond - the trout pond. A local landowner keeps a pond stocked with trout and kindly issued Mike an open invitation to fish. Mike caught a brown trout and a rainbow trout - 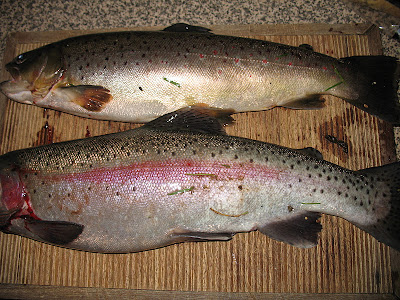 The rainbow was stuffed with eggs - 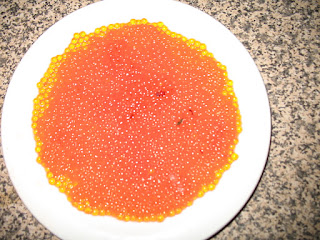 Our flock made short work of that unexpected bounty - 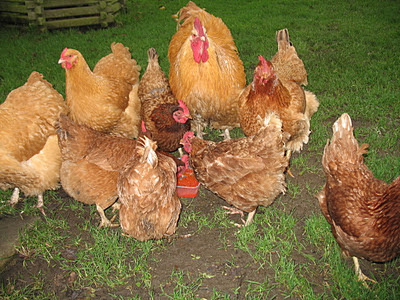 Mike and I even managed a day off to go fishing together. We drove to a fishing lake a few hours away and fly-fished for trout, undeterred by the gale force winds blowing our lines in every direction except towards the fish. Mike lost one, and caught one - both rainbows. Water Bailiff Stu (who happens to be Underkeeper Pete's brother) helps Mike net the trout- 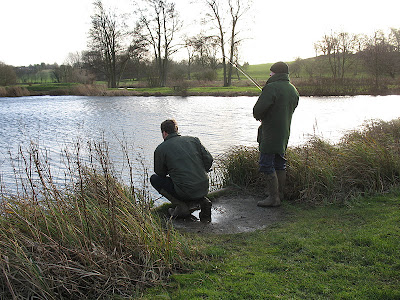 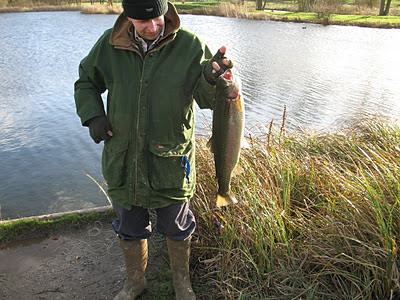 I've started to keep account of how much food we're catching or producing ourselves, inspired by Tamar at 'Starving Off the Land' charting her own year in calories. I'll keep a running list of ours in the sidebar of the blog, for all to see. If our shooting doesn't improve, it could be a short list and a hungry winter. Perhaps some kind soul will send us a care package - I'm partial to Kraft Macaroni and Cheese, but we're set for trout, thanks.
Posted by Jennifer Montero at 06:47 6 comments: 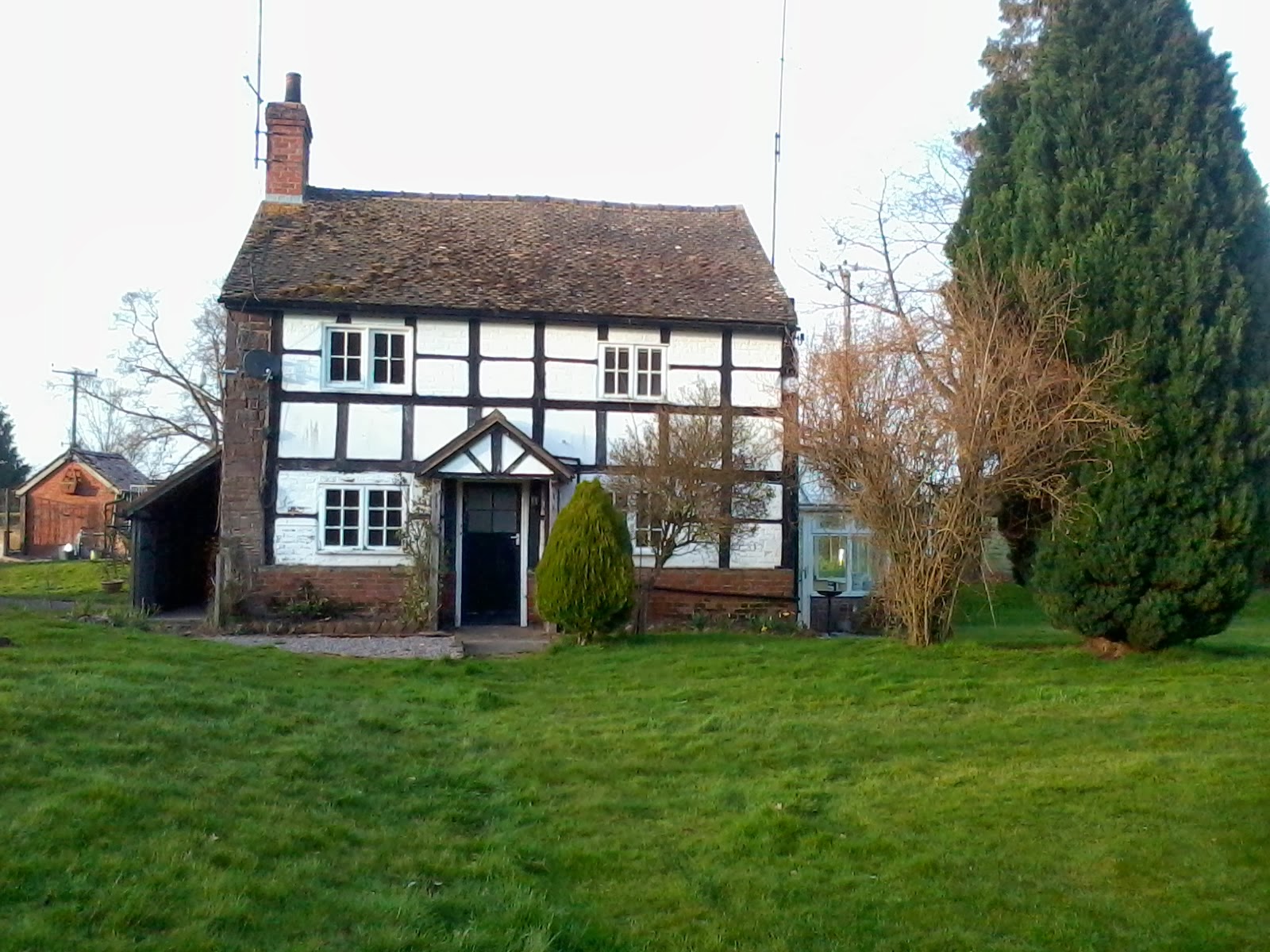 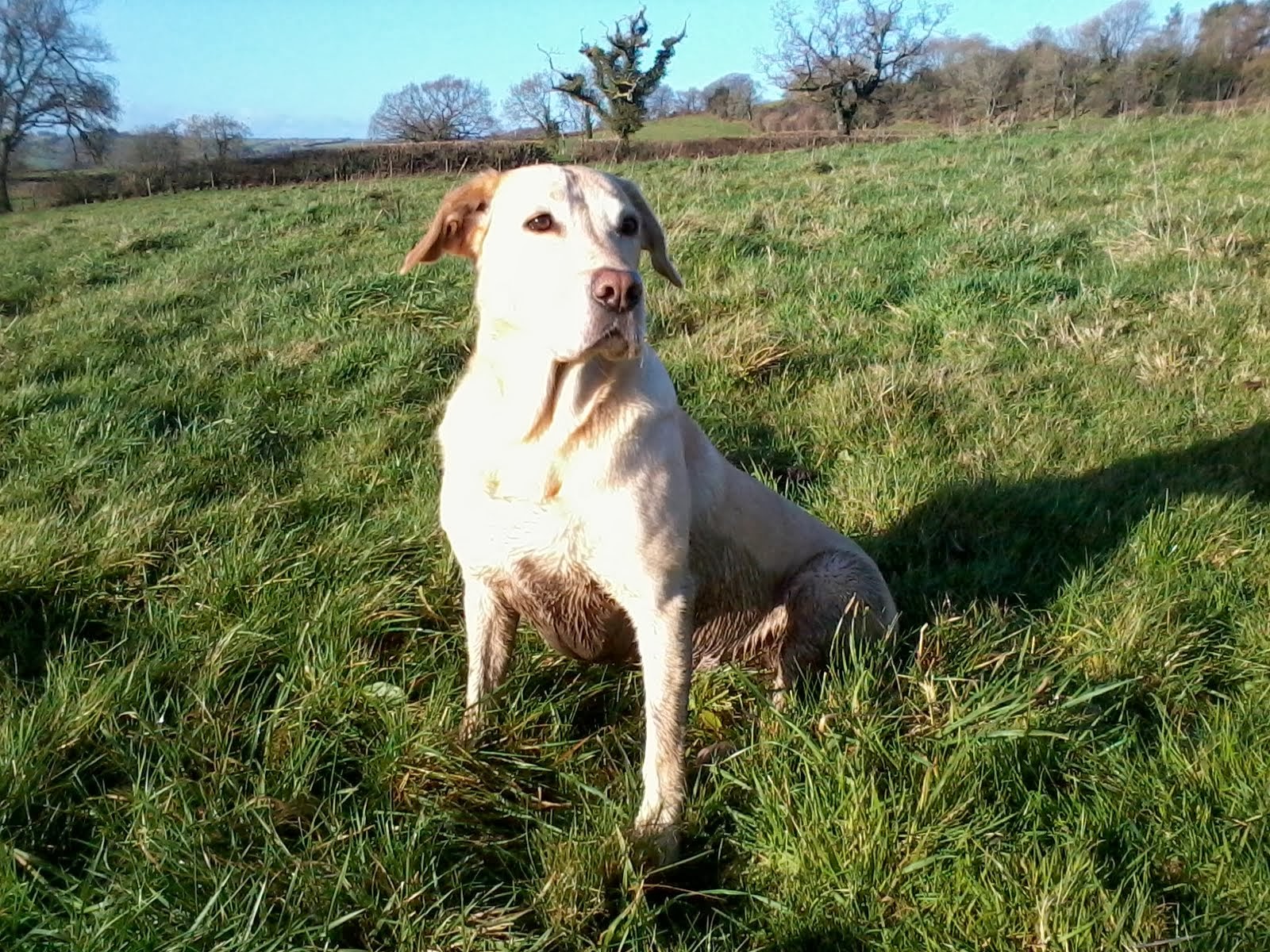